skip to main | skip to sidebar

Well, what to say. The state railways [Valtion Rautatiet, also called as VR] of Finland did it again. They disappointed me. Badly. Again. 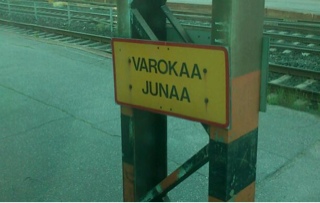 (Beware of the train.)

It has happened many times before, but as it seems, I am not able to break up with them. VR in Finland has unfortunately a monopole in train travel, like ALKO [State alcohol store] has selling spirits, and we have to play with they rules. I wish there was a change and the market would open to competition.

Many people in Finland has an opinion on this subject, particulary during the winter time, if one happens to be a work traveler shuttling between the capital area, Turku and Tampere, or even further. The nice new Pendolino fast trains are the ones the company purchased from Italy. They may have had the looks, but the efficiency is something different. It normally happens that those trains do not work properly during the winter time (or summer) and bad delays happen every year particulary when the first snow falls. The new Pendolinos are always late, the doors are stuck because of the frost and nothing really works. If you choose to travel during the first snow, I recommend to take the 'slow train' [pikajuna] and in most cases you will arrive in scedule. Of course the 'slow train' equals to 'old train' and you may freeze your ass in toilet that is allowed to be used only when the train is moving (yes, the toilet has a seat, but also a straight pipe down to the train tracks and the snow might move up in the pipe because of the air turbulence...and you do not want your shit to end up to a station for enjoyment). We also have a saying "works like a toilet in the train", meaning that it/something definetely does not work.

The new computer based ticketing system is a fiasko, and it is not flexible at all. The ticketing maschine has a touch screen system (never works) and I once witnessed a morning bussiness travellers nightmare; the "system" had made several mistakes and sold 3 tickets on the same seat. The bussiness travellers were yelling among each other and also at the conductor, who yelled back because he was not able to solve the situation. It was one of the morning Pendolino trains and very crowded indeed.

It is not allowed to travel without a seat in Finnish trains and buing the ticket from the clerk at the counter or from the maschine or in the internet is cheaper than getting one in the train. So, it is not often that you buy the ticket in the train. Also, the internet ticketing is crap. There are several options, but you have to get a ticket to a certain train at certain time and you are not allowed to change it (costs 5€ and can be done if you have the right ticket type) but sometimes the change is not possible, which we also learned today. Some of the internet tickets can be cancelled, but it costs you 10€. Apparently I had bought the cheaper advace-tickets which are not refundable and you are not allowed to change them. Well, now I know. We kept our money this time, but spend it on refreshments while waiting.

What normally happens though, is that people do have a reserved seat, but they choose to sit in another location for some reason. Someone maybe wants to charge the mobile phone or laptop, or just does not want to sit next to a stranger. Then the new passenger finds the reserved seat already occupied and chooses the next free one because they do not want to bother other people (very Finnish). Then there is a comical act going on after a while, when one newer passenger wants to get to his/her own seat and  a domino effect starts when at least a half of the passengers in the cart are changing back to they reserved seat, and everyone gets very pissed off.

Another typical Finnish behavioural  act is not really on trains, but everywhere. But I give my example in here, because it relates to the story. When the train is arriving to the station, Finns jump up well before and start lining up to the doors. When they finally get out, they suddenly stop IN FRONT OF THE DOOR OUTSIDE and start doing something, leaving every one else trying to get out. This happens every time. Everywhere. In the end of the stairs, escalators, in front of the elevators when doors open...just name it. Where ever there is a narrow way, you will find Finns blocking the way, for no reason. I have never experienced that anywhere else in the world and I think it hast to be a very unique Finnish act.

The pricing with the trains is also a nightmare. They even changed it now, that the most travelled routes and times a more expensive. And also note, if you are a student in another country, you will not get the student discount price, because you do not have the tag of the Finnish railroad company in your card. Be prepared anyway to pay the full price, they show no mercy. You have to have the Finnish student card, not like it normally works in Europe. And, since the bus routes are very unefficient, sometimes the train is the only way to go. The North-South connections are well served with the train, but connecting from West to East can be tricky. As a comparison I can tell, that an average ticket between (one way) Tampere and Helsinki costs 30-40€ (and more) and the ride takes less than 2 hours. There is not really big time differences if you take the fastest train (20min), only the fast train does not stop on all the stations in between. Also, to add some more confusion, the new Pendolino trains are normally build from 2 different 6 cart trains and because the long train is always late (or that it is impossible to move from cart 6 to number 7, you have to go outside to change) they have now started runnig the trains separately. Imagine the confusion when the train arrives and you have the cart number 8 in your ticket and the arrived train only has 6 carts...oh, well, you just need to wait for the next carts numbered 7-13 to arrive. I did not want to be the foreign traveller waiting on the platform without any announcements.

There are some good things though, the newer trains have a free wifi connection and also electricity sockets next to every seat. The recorded announcements come in 3 languages (Finnish, Swedish and English). The new sleeping cabins on night trains to Lappland are a bit of luxury, there is a toilet and a shower in the sleeper! The price can be harsh and it is not for every budget. I travelled through night from Tampere to Rovaniemi with my dog and had to make a reservation on a whole sleeper cabin, it cost 138€ one way...I was happy that the trip was work related and it was paid.

Wikitravel page of Finland has a somewhat good entry on train travel and you can read some real stuff  from there as well. This weekend we had both an interesting trip to Estonia and also Finnish and Estonian Midsummer. This trip included a trip from Tampere to Helsinki with a train and vice versa. Both ways included some extra hassle.

Interesting study about Finns...
When I travel in Finland I found train also very expensive...We tried Hitchhiking with my female friend, but both we were atonished that noone will give us a ride, only inmigrant refugee from Afganistan and other that dont speak any English...
We would definitely travel more if we were able to get any student discount there...

Dear Noelfy, I used to do a LOT hitchiking when I was in my early twenties, and during that time it was not as common as during the 80's when everyone was hitchiking. It is less likely you'll get a ride from Helsinki, there are no good places to start. During the 80's there started to be violence, bad stories about hitchikers stealing and stabbing, as well as drivers raping...and it then caused some problems in that scene. I have a friend who is over 30 and hitchikes, and succeeds quite well. In Finland it is also about the position of, if the car can stop according to regulations etc. The best place is to stand after traffick lights (when in city) on a bus stop, so the driver can decide while waiting if they want to take you with. Another tip is to wear modest clothing, not too much luggage and Aalways always wear a reflector. It is less likely you'll find a ride during winter or even autumn in the dark...the driver wants to see you properly and it is a pain in the cold. So, the season is roughly from late April to late August.

The are now started to be some low cost bus lines (the market is opening from the monopoles) and shared car rides are getting more common. I can write a post about it if there is interest when I get back home?

The pictures on my blog are mine, if not, it is stated. Ask before use, we both will be happier.

Miss Moray has been diving with